How Many Days until Hanukkah 2020?

How Many Weeks until Hanukkah 2020?

How Many Months until Hanukkah 2020?

Hanukkah is a Jewish feast which starts 25th day of Kislev (according to the Hebrew calendar) and continues for eight days. This feast is also known as Festival of Lights or Feast of Dedication in different cultures. According to the Jewish culture, Hanukkah starts with lighting the candles which are known as Hanukiya. When we look at the Gregorian Calendar, Hanukkah celebrates for seven days between November and January generally. Let’s look at the main question for this year:

This year, Hanukkah feast will start at December 2th – Tuesday and will finish at December 10th – Wednesday. You will find the answer of “When is Hanukkah?” in the countdown above on this page. If you want to follow that how many days are there until Hanukkah, you can take a look at the countdown. It shows the number of days until Hanukkah this year. So, you can make an easy calculation about beginning of Hanukkah feast in 2017 if you know the starting date. The feast will start at December 20th and we can say there are more than 8 months. 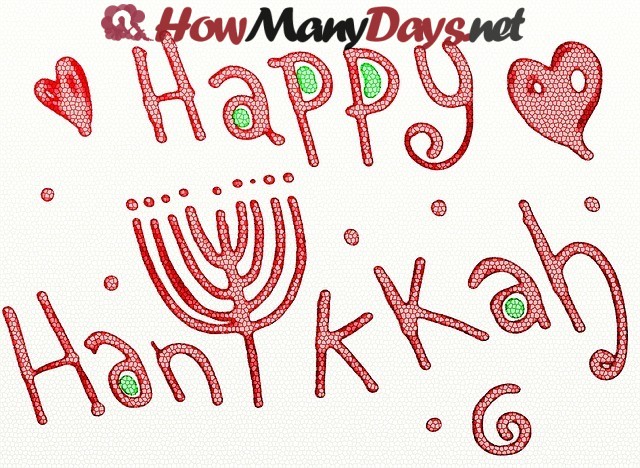 When we look at the history of Hanukkah, we can observe that there are different myths and beliefs about the beginning. But, the most widely known is starting BC 175. The Jews were under attack and harassment of the Helen armies in 175 BC. While Helens were burning everything, the Jews also wanted to enter the holy temple under attack and burn lamps. And they managed it. But they only found enough oil for a day. And yet a miracle was happening and the oil lamp burns for 8 days. So, from that day onwards, Hanukkah candles are burning for a full 8 days of the year. This is the festival day. While the candles are burning, it is remembered that God always takes place behind miracles and on the other hand it emphasizes that Jews will always resist assimilation as oil does not mix with water.

The festival is celebrated with the lighting 9-arm candlestick called Hanukkah, which looks like Menorah and has two more arms. According to the Jewish belief, the light of the Menorah, a seven-spoke candlestick, symbolizes the presence of God. The Seven-arm candlestick is especially common among the Eastern Jews. They are often used in their prayer books, on the walls in houses, in seven verses in musicals, in menorahs, in tombstones and especially in wall paintings in synagogues, in stained glass and in mosaics. In the old mosaic imitations, a Menorah was placed on the right and left of the Covenant. Today, Menorah is used as an official symbol of the State of Israel.

So when the Hanukkah starts, one arm lights every day, the arms in the middle is always lit, and at the end of eight days the feast ends when all arms of the nine-arm candlestick are burned. Finally, we can say, Hanukkah is one of the most important feasts for Jewish people. If you wonder the date of Hanukkah for this year and if you are asking “How many days till Hanukkah?” question, you will see a countdown and detailed information about the background of Hanukkah feast on this page.